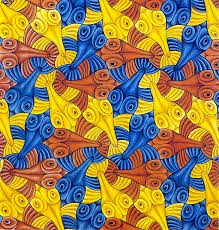 
Let’s consider the song Erettu Padhinaaru from Raja Rajaathaan (Tamil 1989).  The first interlude is a beautiful arrangement with three instruments in C&R that have a good translation symmetry. The combination here is a bit unusual, Sitar, Flute and Violins.  The arrangement pattern is as below:

Though not perfect from a perfect mathematical translation symmetry, which would be one of the choices below, assuming that the starting instrument combination is fine,


Raja keeps one variable constant in the initial two patterns and uses the variable combination in his third pattern. Given that Indian composers rarely focus on symmetry, this is very good arrangement

Let’s next review the second interlude of the song Oru Mandharapoo Vandhaa Mandhiramaa from Chinna Jameen (Tamil 1993). This interlude has a bit complex but perfect translation symmetry in its arrangement.  The interlude’s arrangement pattern is as below:


How do you read the above arrangement’s symmetrical C&R arrangement? The first and the third C&R instrument pairs are constant. The variability is introduced in the second and fourth instrument pairs. This is like a mathematical progression. Unfortunately, as the interlude length is limited, we do not see the fifth, sixth pairs and so on. The symmetry of this arrangement is hard to uncover as you get swayed by the melody and it becomes clear only when you document he instrument pairs.