This involves a number of call and response arrangements that have a symmetrical pattern. It is hard to define a perfect symmetry with two instruments. 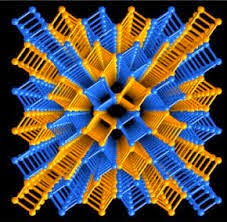 With two instruments in a call and response arrangement, the best you can do is to have a pattern that involves the same instrument doing both the call and the response apart from a call by one instrument and a response by another. You have to get creative beyond that to repeat these three variations to find symmetry. It is indeed a great achievement, given the film music pressures of creating interludes in perhaps less than 5 minutes (I do not think Raja would have taken anything more than that to notate an interlude).
Ila Nenje Vaa from Vanna Vanna Pookal (1991 Tamil) is one such marvel. In interlude 2, here is how the instrument pattern is used by Raja.

However, this is the closest to symmetry you can get with two instruments from the best of composers in Indian film music!
Let’s hear the two instrument symmetry of Ila Nenje Vaa…

Halli Lavaniyalli from Namoora Mandara Hoove (Kannada 1997) is another such marvel if you observe the second interlude’s arrangement very closely. The length of some segments in the C&R makes it hard for one to observe the pattern. However, this is a brilliant arrangement with two instruments (flute and voices). Here is the instrument pattern that is used in this interlude:

Ideally, the configuration must include a third element and it would look as follows:

The symmetry is not easy to figure out as the chorus parts are longer in the first C&R and much shorter in the second C&R.
Let’s hear the near perfect Halli Lavaniyalli…

Another not so perfectly symmetrical two instrument C&R arrangement is the song Minmini Paarvaigal from Julie Ganapathy (2003 Tamil). The arrangement of this song is as shown in the table below:

In the arrangement instrument list shown, it must be mentioned that the when the Flute and Guitar (the third combination) are in a call and response mode, there are background violins. I do not include that as one of the instruments that take part in the C&R. There is lack of symmetry in this as the second and third combinations are out of place. In other words, the ideal symmetrical arrangement would be:

However, the arrangement does sound very melodious in its current form.
Let’s hear the near perfect Minmini Paarvaigal…

Now, is there not a perfect symmetrical C&R arrangement with two instruments by Raja? I know of one and I am sure there are others which I would encourage readers to comment on.
Melle Melle Vannu Chernu from Apaaratha (Malayalam 1991) is one such brilliant perfectly symmetrical arrangement with two instruments in a call and response mode. The second interlude of this song has a fantastic arrangement between the flute and the violins in the pattern shown below:

Another perfectly symmetrical C&R based instrument part is the prelude of the song Oli Tharum Sooriyanum from Vaalmiki (Tamil 2009). The two instruments doing the call and response in this prelude are the synthesizer and the guitar. One can argue that the synthesizer part as a piano part too. The prelude is a symmetrical beauty that has the following pattern:

Our journey of two instrument based C&R symmetry is still not over as we have not seen any with bridges. In the next posts, we will cover some songs that do have bridge induced perfect or imperfect symmetries.
Posted by ravinat at 11:55 PM